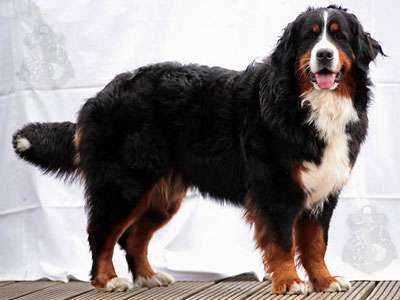 The Bernese Mountain Dog is one of a group of four breeds known as Swiss Mountain Dogs, and the only long-haired variety. As far back as 1888, these large sturdy dogs have been guarding livestock and pulling carts in villages of the Alps. During World War 1, farming and the need for stock dogs declined, but once the war was over, the Swiss focused on bringing back their native breeds. In 1904 the Swiss Kennel Club was formed, and shortly thereafter the Bernese was officially recognized as a breed. In 1936, two British breeders imported several dogs from Switzerland, and the first litter of Bernese Mountain Dogs was born in England.

According to the official standard, the male Bernese should stand between 24 and 28 inches tall, and weigh between 80 and 110 pounds, with females being slightly smaller. The head is broad with a flat skull, and the body should be strong, and slighter longer than tall. The coat is tri-coloured, primarily black with rust and white markings. Most have a characteristic white cross on the chest. The Bernese has a thick double coat, best suited for the outdoors, and they are happiest in a cool or cold climate.

The Bernese Mountain dog has a happy disposition, and is easily trained; however, this should be started early, as they can become difficult to handle if they don't accept the owner as the alpha dog. They are big, sturdy dogs, and physical restraint is not the way to deal with them. The instinct to migrate is inherent in this breed, and plenty of exercise, particularly walking, is essential, both to curb the urge to wander and to keep them at a healthy weight. They are sociable with other pets, and affectionate and patient with children, making them an excellent family dog. While they are physically strong, they don't have a great deal of stamina, so prolonged intensive exercise should be avoided, especially in hot weather.

They are prone to weight gain, and this must be carefully monitored, as they are also very susceptible to joint problems, such as hip and elbow dysplasia. Because they are a fairly large breed of dog, they grow fast, and until they reach the age of two, when the joints are fully developed, they should not be allowed to run or jump on hard surfaces. The Bernese Mountain Dog has an alarmingly high rate of mortality due to cancer, particularly histiocytic sarcoma, an aggressive cancer of the muscle tissue. Also common are osteosarcoma and fibrosarcoma. Joint problems and arthritis are often seen, as is Von Willebrand's Disease, a blood-clotting problem which causes excessive and unstoppable bleeding. Unfortunately, due to the wide range of illnesses which befall this breed, they have a short life expectancy, from 6 to 8 years.

Because of their patient and tolerant nature, the Bernese is a great candidate for obedience competition. They learn easily, and, assuming they are well-trained from early on, lack any stubbornness. They also do well as therapy dogs, visiting hospitals and old-age facilities.

The Bernese Mountain Dog is an ideal family pet, and, provided that all health screening is done, and if you are prepared to deal with some its inevitable health problems, will be a beloved member of your family.