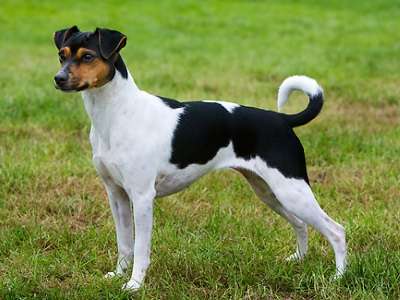 The Brazilian Terrier, Terrier Brasileiro or Fox Paulistinha, is a Brazilian descendant of the Fox Terrier and the Jack Russell Terrier. Its ancestors may have been brought with Portuguese explorers in the 16th century to help keep pest levels on ships under control. A few centuries later, the sons of wealthy Brazilians returned from their studies in Europe with their companions, and the few Terrier specimens they had interbred to create this breed. Plantation owners started using them to hunt and eradicate vermin on their farm. Nowadays, the Brazilian Terrier, so popular in its native country, but little known elsewhere, makes a wonderful pet for the rather cramped apartments of Sao Paolo and Rio de Janeiro.

Following its recognition by the FCI, the Brazilian Terrier has recently begun to be exported for its hunting abilities, and for use as a companion animal. Though similar in features to most other terriers, the Brazilian Terrier is rather large. The average male will weigh up to 20 pounds and stand 14 to 16 inches tall at the shoulder, and the female will usually be only slightly smaller. The coat is smooth and short and its colour is white or tan, with brown, blue or black splashes of colour. It does not require frequent brushing, but some shedding does occur, depending on the individual. As a shedder, his hair may pose a problem to people with allergies and to those concerned with the tidiness of the home, unless special pet-dedicated vacuum cleaners are used. This dog is pretty easy maintenance, with routine bathing and nail clipping required and no professional grooming.

Fiercely loyal and protective, the Brazilian Terrier takes an alert stance whenever he feels you may be threatened and is a tireless watchdog. He may be prone to barking relentlessly and therefore requires some training. He bounces and runs around the home from morning to evening and loves to perform tricks. He can be easily trained, but needs a firm hand to temper his spirited nature. He requires a good deal of exercise, and is generally not an excellent apartment dog for those who don’t have the time to play and walk him. At least one daily workout of one hour should suffice, but the Brazilian Terrier will not turn down more substantial exercise opportunities. If left to his own devices for too long, he tends to bark and dig throughout the day, and may damage the property and annoy neighbours.

In the great outdoors, his hunting instincts take hold of him and he charges whenever a smaller animals crosses his path. Unless he is kept on a lead, he will chase animals and even harm them. On average, he is gentle with pets and humans he is familiar with, but distrustful of strangers. He makes a wonderful guardian and companion for children who play responsibly and is a sociable, tolerant pet. However, he dislikes rough play and values personal space, so he may not be suitable for young children who overstep certain boundaries.

The breed has not undergone any health surveys and life expectancy is, therefore, unclear. You may expect to enjoy the company of this energetic pet for up to 14 years. He may also have few health problems aside from the eye, skin and thyroid conditions common to his breed. He is of a naturally bubbly disposition and is a barrel of laughs for the family. Be prepared to guard the lawn with your life, because the digging instincts in this dog will make it tear it apart, little by little. You need a clear alpha leader in the family to keep the dog focused on his training.