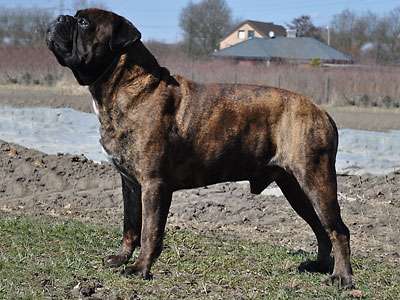 The Bullmastiff is primarily a guardian dog and was historically raised by English gamekeepers to watch over the expansive feudal estates. Evidence suggests he was probably the result of experimental crossbreeding between the Mastiff and the Bulldog, so as to surpass the shortcomings of these respective breeds. The Bullmastiff’s powerful built and courageous demeanor along with the fierceness of appearance naturally provided him with the ability to ward off intruders. He is loving and fiercely loyal as a familial companion and an excellent protector.

The large size is usually a deterrent to both visitors and children, although Bullmastiffs are actually quite friendly and amicable once a bond has been established.

A fully-grown Bullmastiff male usually weighs around 110-130 pounds and is 25-27 inches tall, while females weigh around 100-120 pounds and are 24-26 inches tall. The normal life span for this breed is from 8 to 10 years. The Bullmastiff has a coat that is short, but thick, providing protection from rain, snow, and cold. His coat can be of three colours: red, fawn or brindle.

The Bullmastiff usually portrays a composed disposition that is not given to attention-seeking antics of constant bouts of uncontainable energy. A well-trained dog proves to be reliable and of noble nature. Firm training from an early age is essential and early socialisation indispensable so that he learns to discriminate between intruders and others. The Bullmastiff is usually confident and independent and, thus, needs a firm trainer he can look up to. He is a marvelous companion for those who need obedient and cordial pets, for the Bullmastiff usually maintains a calm and low-key personality.

This breed is an excellent representative of ‘therapy-dogs’ because of the qualities of tranquility, patience and frequent comical behaviour attributed to them. This allows for him to be excellent as an apartment pet who exhibits both patience and a ferociously protective attitude towards loved ones. His lack of high energy should not be construed as laziness or lack of physical prowess, for the Bullmastiff portrays tremendous potential in dog sports that test agility, speed and confrontational skills.

The Bullmastiff works well in an urban society with working housemates since he does not need constant human presence, but requires a few hours of human interaction every day. The Bullmastiff has a daily grooming requirement and everyday brushing of the coat is necessary. Being a short-muzzled breed, the Bullmastiff is easily vulnerable to heat strokes or exhaustion from excessive heat, which means that during hot or humid weather, he has to be kept indoors. While playing outside in such weather, a Bullmastiff should have proper access to fresh water and cool shady spots. Idiosyncratically, they are prone to drooling and frequent states of gassiness, which demand constant attention to maintaining sanitary conditions. This breed has surprisingly high levels of pain tolerance and one must be alert to any injury so as to determine early on the gravity of the same.

The Bullmastiff also shows aggressive tendencies towards other dogs and species because of which proper training is significant, right from the stage of being a puppy. Early socialisation is imperative to his training methodology; he should be exposed to a variety of sensory experiences at a nascent stage so that any unfamiliarity in subsequent, mature phases does not invoke aggressive or offensive behaviour. He usually requires positive training methods and does not respond well to frequent punishments. Crate training is highly conducive to a Bullmastiff’s temperament.