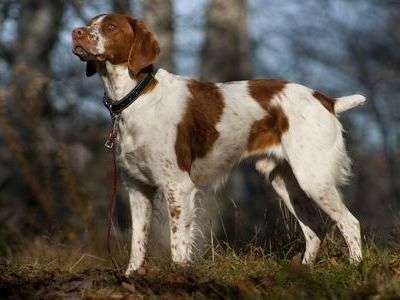 The Brittany Spaniel is the national dog of France. It is a type of game dog that drops to the ground when indicating game, allowing a hunter to cast a net over both dog and game. While they are still used extensively for hunting, Brittanys also excel in a wide range of environments, such as domestic pets, in show and in trials.

While Brittanys have a long history in paintings, back to the 17th century, one must look to the 19th century to find written records of the breed. English hunters visited France and brought their pointers and setters over, and bred them with the local dogs. Thus the Brittany Spaniel was established.

The Brittany has an athletic, long-limbed and solid build, with an intelligent and alert expression. They are single-coated and shed little hair. Colouring tends towards liver, orange, red, roan and black. They stand on average 50 centimetres tall fully grown.

It has a robust health, and is generally a hardy dog. Its long, floppy ears can retain water, so a careful owner should check them for moisture regularly. There are a few health problems in the Brittany, such as epilepsy, breast cancer and hip dysplasia, but on the whole it is a strong, healthy breed.

As the dog has a medium-length coat, regular brushing is required, but apart from the occasional bath and shampoo, that is most of the grooming care the Brittany needs. If this dog is active in a grassy or woodland environment, it should be checked over for ticks.

Brittanys are intelligent, good-natured and easy to train. They also have a sensitive nature, which makes them easy to correct and renders loud and overbearing discipline largely unnecessary.

As a pet, the Brittany is excellently suited to domestic life. Besides being intelligent and easy to train, it has a sweet and gentle nature. Treated well, the Brittany will be an obedient dog that is eager to please.

As with other hunting and task dogs, they demand tasks in their lives. This means an owner must spend quality, attentive and enthusiastic time with their pet to ensure its needs for physical and mental exercise are met. Long walks and games will help to work through some of the Brittany’s exuberance and energy.

Since it is a breed that loves a purpose and the outdoors, it should only follow that a lack of these things can cause problems with the animal. When the Brittany is lacking in physical or mental exercise it can become flighty, irrational and hyperactive. The breed also demands a firm, calm owner who will give the animal proper boundaries. This is nearly as important as the physical and mental stimulation, as the Brittany has a gentle disposition and can become timid and shy should it become unsure of its role and place. As such, strong boundaries, consistent rules and calm praise will go a long way to ensuring the happiness of this animal.

Brittany Spaniels should be socialised extensively as puppies to ensure their compatibility with children. They can be raised to get along with a variety of children, strangers and other pets (possibly not birds, however). They can especially get along with children for exuberant romps, however care must be taken that the active and bounding Brittany does not knock over a smaller, running child!