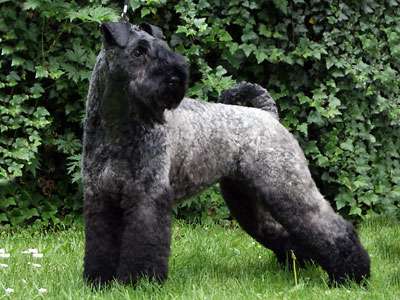 As the name suggests, the Kerry Blue Terrier originated in County Kerry in Ireland and was developed in the early part of the 18th century. The name Blue comes from the distinctive colour of this breed’s coat and this is the national terrier of Ireland. In its native country the Kerry Blue Terrier is referred to as the Irish Blue Terrier and it is believed to be descended from the Portuguese Water Dog and the Soft Coated Wheaten Terrier. This breed originally served as a retriever, a general purpose farm dog, a hunter and a house guardian, while it is also used in police work. The United States Kerry Blue Terrier Club was founded in 1922 and the Kerry Blue Terrier was recognised by the American Kennel Club in 1924.

This muscular, medium sized dog features a long head that is in good proportion with the body. The flat skull has a slight stop, while the black nose has wide nostrils. The teeth of the Kerry Blue Terrier either meet in a level or scissors bite, while the dark eyes are small. The small v-shaped ears are carried forward, while the long neck widens as it reaches the shoulders. The coat is soft, wavy and dense and comes in a range of colours from very dark blue to black, while there are dark blue or blue points on the head, feet, muzzle and tail.

The Kerry Blue Terrier is a highly intelligent animal and is very playful and active. It often makes people laugh with its comical ways and loves to spend time with its owners. This breed is very sociable and takes well to strangers and other animals if it is properly socialised. The breed loves to play games and enjoys agility training and other types of activities such as ball games. This makes the Kerry Blue Terrier a good companion for children and its friendly and gentle nature means that it is rarely snappish. However, it can become bored and irritable if it is not well stimulated and during training it is important to vary the types of tasks that are introduced so that the dog remains interested and focused.

This breed tends to be very healthy, even until late in life, although it is prone to PNA, hip dysplasia and cerebellar abiotrophy. There are also minor concerns with the Kerry Blue Terrier such as hair follicle tumours, cataracts and retinal fold.

This breed is fairly active indoors and adapts well to apartment life, especially if people are constantly around.

This breed is very sporty and needs regular exercise at least once a day. The Kerry Blue Terrier can become wilful if not kept under control and must be forced to walk to heel. The Kerry Blue Terrier needs thorough grooming every six weeks, while hair must also be removed from their ear canals in order to prevent ear infections. Combing, bathing and brushing must be performed every week and unlike other breeds regular bathing will not dry out the skin. In fact, the beard of this breed can become packed with food and smelly if it is not brushed and washed regularly. The hair does not tend to shed and is odourless when cared for, making it a good breed for allergy suffers.