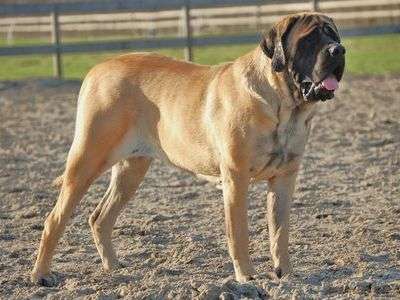 The Mastiff comes from a group of dog breeds known as "molossers", which is a term given for breeds known for their strength and stature, such as bulldogs or pit bulls. Mastiffs are considered the largest breed of dog in the world, weighing in at arounds 220 lbs or higher. Their strength means that they were often historically fought against wild animals for sport.

Though Mastiffs can receive bad press for being aggressive in nature, this is not the case; in fact, they should be good-natured and relatively docile. Their personality can be shaped by certain factors, such as their genetic traits, how well they have been trained and the degree to which they have been socialised.

The breed is tolerant of strangers outside of the family unit, but is still capable of being a good guard dog. They will protect the family and home from intruders, though they also do not like conflict between members of the family.

Timidness can be quite commonly seen in Mastiffs. Although this can be overcome to some degree through socialisation and obedience training, it requires a lot of effort from the owner. Despite this, the breed is often taken to shows.

Overall, the breed should be loving, loyal and gentle. They can make ideal family dogs, though as is the case with any breed, there should always be supervision from an adult if children are present. It also goes without saying that children should be taught not to handle the Mastiff roughly, as they will not tolerate this. They are also generally tolerant of other pets in the household, particularly where these pets have been brought up together since a young age.

In terms of colour, the coat is usually apricot, brindle (often described as tiger striped in appearance), or fawn (a sort of yellowish tan).

Mastiffs have a short muzzle on top of a squared off head. The muzzle and most of the face is generally black, with the ears being black or very dark in colour also. The ears droop alongside the face in a "V" shape, being rounded off at the tips. A classic trait of the Mastiff is the wrinkling skin around the head and neck. This must be cleaned properly on a regular basis to prevent the risk of any infections.

The dog usually comes in at no less than 30 inches in height, at the shoulders, or 27.5 inches for females of the breed. A health weight can be anywhere from 130 to 220 pounds, sometimes higher.

As is the case with all dog breeds, Mastiffs carry a number of inherent genetic traits that make them prone to some conditions. These can include hip dysplasia, eye conditions, or seizures. However, though they are prone to these conditions, it does not mean every dog will get them and finding puppies from a reputable breeder can help to reduce the incidence of such ailments.

In terms of exercise, the Mastiff doesn't necessarily require the same level of exercise as some of the more active large dog breeds, but they do still need to be taken outdoors at least once per day. This should be done in the morning or evening, when the weather is cooler.

Like many large dog breeds, the Mastiff has a lifespan considerably shorter than some smaller breeds. They can typically expect to live for just 8 to 10 years.