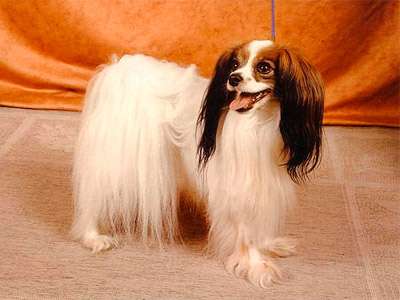 The Phalène, also known as the Continental Toy Spaniel, is a small dog that weighs about eight to nine pounds and stands at a height of about 10 to 11 inches. It has a small head with a somewhat short and thin muzzle, dark eyes, and a medium-sized neck. The ears have a slight lift at the base before dropping and are covered with long, wavy hair.

The long tail curls back over the body and is covered with long hair. The straight, long coat is smooth to the touch and has frills on the chest, back of the legs, ears, and the tail. Coat colour is mainly white with patches of nearly any colour. Other coat colours include brown, sable, black, lemon, and silver.

The Phalène is believed to have originated from France more than 800 years ago. It was mainly kept by the French royalty and a few wealthy masters. It was also owned by a few 15th century celebrities such as Marie Antoinette. It was very common in royal courts throughout Western Europe between the 13th and 18th centuries. It became more famous in France and other parts of the world in the 21st century.

Apart from being eager to please, the Phalène is also known to be intelligent, lively, and outgoing. It is also playful and affectionate with both children and adults. It is loyal to its owner and adapts well around other pets such as cats, geese, ferrets, and rabbits.

The Phalène can live for a maximum of 16 years. During its lifetime, it can be affected with health problems such as Von Willebrand's disease, patella luxation, and progressive retinal atrophy (PRA). One of the best ways to ensure that this dog is healthy and safe is by taking it for regular examinations to your local veterinarian.

Just like other types of dogs, the Phalène should be trained and socialised from an early age to curb behaviour problems and improve its relationship with people and other dogs. With its highly obedient nature, this dog is easy to train as compared to other breeds. It grasps new tricks fast and is always ready to do whatever it is asked to do by its master or trainer. To get better ideas on how to train and socialise this dog, ask for assistance from your local professional trainer.

Because the Phalène is a playful and active dog, it needs plenty of exercise. Apart from walking, jogging, or biking with it, you can also keep it occupied with games such as Frisbee, tennis, or tug of war. These activities not only help you keep the dog fit, but also make it more productive.

Due to the dog's small size, younger children may not know how to handle it. With this in mind, you have to supervise it and your children closely, especially when they are playing. The dog should also not be allowed to jump from high places in the house or the compound as it might easily hurt itself.

When it comes to feeding, it is advisable to give the Phalène two meals a day. Make sure that the diet comprises of healthy foods to prevent obesity. Do not forget to give the dog plenty of water after or before meals.

Daily combing or brushing of the coat helps you get rid of loose hair and control shedding. Occasional bathing or shampooing may also be necessary. Also, brush the teeth and clip the nails on a regular basis.