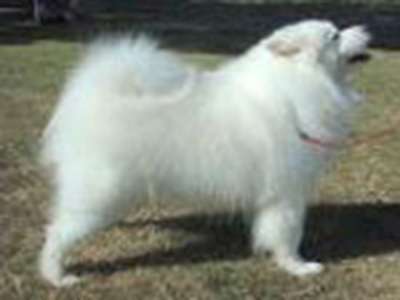 With its pale, fluffy coat and a curly tail flopped over the back, the Samoyed is instantly recognisable. They are also known for a magnificent ruff of fur around the neck. Perhaps the most distinctive feature of the breed, however, is the wide grin that makes these dogs appear constantly happy. Pink tongues and black lips against the Samoyed’s pale fur help to exaggerate the ecstatic expression which has given the Samoyed its nickname of Smiler. These happy, friendly dogs have a temperament to match their smiley faces.

Although Samoyeds are often thought of as pure white, they can also be a light shade of biscuit, or a mixture of the two colours. They usually have brown or black eyes in an almond shape.

Dog from the North Country

Samoyeds are part of the spitz family of dogs, originating in cold, northern regions and recognisable by their pricked ears, thick coats, and pointed muzzles. Like other members of the family, they were originally bred for pulling sleds.The explorer Nansen used Samoyeds on his polar expeditions, and his fellow Norwegian, Amundsen, also had a Samoyed lead dog.

Transport was not the Samoyed’s only duty, however. They were also used as herding and guard dogs. It is thought that living and working in proximity to their human families is what has made this breed so friendly and sociable. Today’s Samoyeds are pleasant and playful companions, and are usually good with both children and with other dogs.

Samoyeds make look like big balls of soft fluff, but they are generally just as ready to run and pull as their ancestors were, and they do require plenty of exercise. They can be trained as sled dogs, and Samoyed teams have taken part in the Iditarod, generally regarded as the world’s toughest sled race.

Training and exercise routines that use elements of herding also work well with Samoyeds. The breed’s herding instinct is strong, and can sometimes lead Samoyeds to try herding family members!

Friendly, playful, and eager to please, Samoyeds will enjoy a wide range of activities, from obedience training to flyball, just as long as they get to be the centre of attention and hang out with their people.

Knit your own dog

Like other northern breeds, the Samoyed has both a top coat of wiry guard hairs and a soft undercoat. Once or twice a year, a Samoyed will blow its coat, rapidly shedding the undercoat in clumps. They also require regular and thorough grooming, which should be an important consideration for anyone thinking of taking on a Samoyed.

Grooming and coat blowing, along with the regular shedding of small amounts of hair, can result in a large quantity of fluff for a Samoyed’s owners to clear up. Some craft loving owners have their dogs’ shed fur spun into knitting yarn, or spin it themselves, and it can also be used in felting.