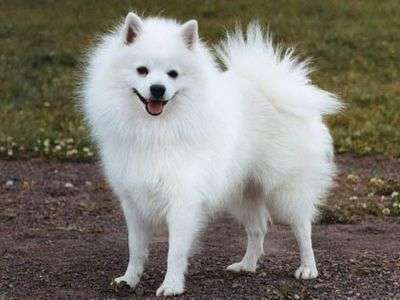 The Italian Volpino is a Spitz-type dog that closely resembles the Pomeranian, although not related to it. Its name „Volpino“ means „little fox“ and probably refers to its fox-like head and mussle. As a very rare breed outside its homeland Italy, the Volpino Italiano’s history stretches back to ancient Rome and Greece. Its direct ancestor is believed to have been the European Spitz. After breaking away from that line of Spitz-type dogs, the Italian Volpino became extremely popular in Italy from the Reniassance onwards. It was kept by aristocrats and ordinary folk alike. Famers used it mainly as a guard dog, with its main purpose to alarm bigger dogs of intruders. Some writings suggest that even the great artist Michelangelo owned a Volpino Italiano. It gained popularity as a favoured companion of rich ladies, which lasted for centuries. Outside of Italy it remained relatively unknown. However, for unexplained or unknown reasons, the breed was nearly extinct in the 20th century. In 1965 only five of these once popular dogs were left living on Italian farms. Thanks to the efforts of some breeders, who in the early 1980s started extensive projects to save it, the Volpino Italiano survived and was finally recognised internationally in 2006. Today it is still very rare even in its homeland Italy. Only a few hundred of these dogs are living in other European countries like Britain, Finland, Norway and Sweden als well as the United States.

As a little Spitz-type dog, the Italian Volpino's most distinctive feature is its long, dense and straight coat, that appears in a bright white colour. A solid red is also common, tones of cream and champagne as well as light orange ears are tolerated, but generally not desired. The fur standing off the body makes the Italian Volpino look like it has been wrapped in a big muff. It is of a square and compact build. With a shoulder height of up to thirty centimeters it can weigh up to five kilos, the females being slightly smaller than the males.

As a very playful, active and lively little companion the Italian Volpino is an ideal family dog that is devoted to its owners. It becomes very attached to the people it lives with, including the children of the household. With this busy, affectionate and curious little dog, one will never get bored. Although it enjoys activities and playtime the Italian Volpino also loves to relax and to be cuddled up to its owners, as affection and close company with humans is key to its wellbeing. As a bred guard dog, the Volpino is of a fearless and sometimes stubborn nature, as it is independent and has a strong temper. Its strong instincts to guard its territory mean it is an excellent alarm system with its loud and shrill barking. Its heart belongs only to the people in its family. Strangers, including other children are regarded as intruders and therefore treated as enemies. If not trained and socialized from being a puppy, this characteristic can pose quite a danger, because the Italian Volpino can get very aggressive and may snap.

This dog can be kept in a city apartment as well as in a house with a garden. It needs regular exercise, but doesn’t require extensive walks or sporting activities. Its playful character makes it an ideal dog for families with little children, but also an uplifting companion for elderly people who live in a single household. As the Volpino is a regular shedder, it should not be kept by somebody who hates vacuuming or hasn’t got the time to brush its bushy and thick coat thouroughly on a regular basis. As a very healthy breed it rarely develops conditions like cataracts or heart problems and can live up to 16 years of age